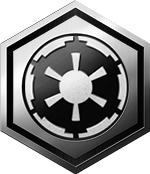 •Unique
When attacking a ship inside your auxiliary firing arc, you may add 1

When defending, you may spend a focus token to change 1 of your blank results to an

When attacking, during the "Modify Attack Dice" step, you may cancel all of your dice results. Then, you may add 2

results to your roll.
Your dice cannot be modified again during this attack.

•Unique
Enemy ships that you have locked cannot modify any dice when attacking you or defending against your attacks.

Once per round, after you perform an action, you may perform 1 free action shown in your action bar.
Then receive 1 stress token.

You cannot have more than 1 evade token.
During the End phase, do not remove an unused evade token from your ship.

TIE only. Modification.
You may treat all bank maneuvers (

The Upsilon-class shuttle served as a command ship for many of the First Order's elite officers and agents as they spread terror accross the galaxy.

•Unique
Imperial only.
Once per round, the first ship that declares you as target of an attack immediately receives 1 stress token.

At the start of the activation phase, choose 1 enemy ship at Range 1-2. You may look at that's ship chosen maneuver.

After you perform an attack, you may acquire a target lock on the defender.

Large ship only. Modification
After an enemy ship executes a maneuver that causes it to overlap your ship, roll 1 attack die. On a

This site is not endorsed by Lucasfilm Ltd. or Fantasy Flight Games and is intended for entertainment only. The Official Star Wars site can be found at www.starwars.com. The Official Fantasy Flight Games site can be found at www.fantasyflightgames.com. Star Wars, the Star Wars logo, all names and pictures of Star Wars characters, vehicles, and any other Star Wars related items are registered trademarks and/or copyrights of Lucasfilm Ltd., or their respective trademark and copyright holders.
Confidentiality policy.